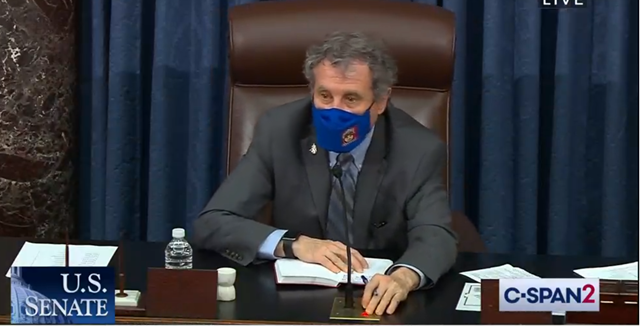 Democrats passed the $1.9T Covid relief package (HR 1319) that was actually only 9% related to the pandemic. It provides $1,400 per adult person in direct payments to Americans. The $15 wage hike was not allowed to be in the bill per the Senate Parliamentarian, and when Bernie Sanders introduced the amendment to do so, it failed, thanks to 7 Democrat defectors. All Democrats voted for the final stimulus package; all Republicans voted against it. It passed 50-49 because one Republican was absent for a family funeral. The bill now goes back to the House for reconciliation before sending it to Biden.

It only took them 27 hours to get it passed. After Sen Ron Johnson forced the reading of the entire 628 page bill, it took a “vote-a-rama” in which amendments were put forward to stop some of the more egregious spending items. No, they didn’t work for the most part. The session took from 9 a.m. on Friday to Saturday morning, 27 hours later – the longest vote in history.

Sen Rand Paul had previously forced the Democrats to back off of allowing Planned Parenthood to receive PPP funds. Sen Ted Cruz tried valiantly to stop illegals from receiving the stimulus checks, but in the end, his amendment failed. Other Republicans attempted to save the Keystone XL Pipeline, but that failed as well.

Democrats just voted against my amendment that would have prevented American taxpayer dollars from being handed out to illegal aliens in the form of $1,400 stimulus checks. https://t.co/zYNGrC9dqZ

Democrats want Americans to believe that the bill they’re rushing through the Senate today is for coronavirus relief, but the truth is that less than 10% of the bill goes directly toward combating COVID19. The other 90%? It’s not hard to guess – just think “liberal wish list.” pic.twitter.com/5c3PvYPhiG

Senate Democrats just managed to pass their bloated spending bill disguised as ‘COVID relief.’ This is the first COVID bill to be entirely partisan because it isn’t designed to help end the pandemic—it’s a blatant attempt from Dems to jam through a partisan wish list.

This boondoggle of a bill is a case study in the pitfalls of pure partisanship. Democrats set the record for the longest recorded vote in modern history because it wasn’t ready for primetime.

The bill now heads to the House, where it will be taken up for voting on Tuesday this coming week. Progressives are unhappy that the minimum wage will not be in the bill – and Pelosi can only afford a loss of 4 votes to still be able to send it to Biden’s desk. We’ll see whether the Progressives decide to sink the ship or go with the flow.