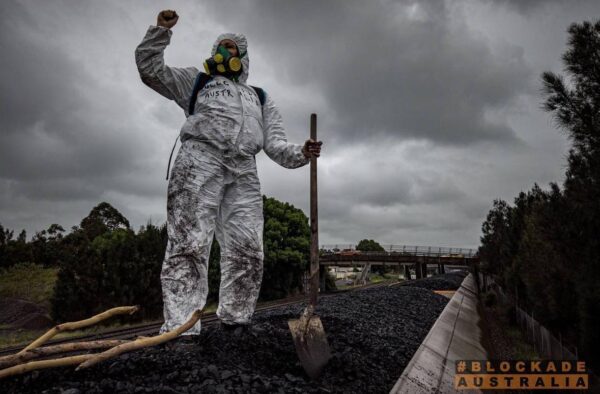 An environmental activist involved in a multi-day long operation to block the passage of coal trains near the world’s largest coal export port in New South Wales (NSW) has been jailed for 12 months.

Herbert participated in an organised operation by Blockade Australia which lasted 11 days, halted railway operations on 20 occasions, and led to the arrest of over 20 members with some potentially facing 25-year jail sentences.

“[Herbert] has this afternoon been sentenced to 12 months imprisonment, 6 months no parole, for taking nonviolent direct action as part of the Blockade Australia mobilisation in Muloobinba/Newcastle,” a Blockade Australia wrote in an update.

“He was arrested once during the first week of the mobilisation after he stopped a coal train for 5 hours by climbing on top of it.”

Blockade Australia described the sentence as unprecedented and an overreach of power. The group also expressed concern that those involved in the process were relatives of politicians who had previously expressed support towards coal production.

“This is a rolling blockade to distort and destroy a perfectly legal activity: coal mining that delivers billions of dollars of revenue and income to workers and families in our region,” he said, reported the Newcastle Herald.

NSW Police Commissioner Mick Fuller said the protesters would face charges of up to 25 years for life-threatening conduct that involved climbing trains and hanging from large tripods.

“It’s unacceptable,” Fuller told 2GB. “We understand that people have a right to protest … but if you think about the danger that some of these passenger trains on these lines are travelling at 160 kilometres an hour—you think about if they don’t get a notification about these tripods, I mean you could see hundreds of people die.”

Since then, Newcastle Herald reported that the task force had conducted multiple raids of locations suspected to be involved with Blockade Australia.

NSW Police had previously come under scrutiny over excessive use of strength in enforcing COVID-19 lockdown measures.

Daniel Khmelev is an Australian reporter based in Perth covering energy, tech, and politics. He has a background in maths, physics, and computer science. Contact him at daniel.khmelev@epochtimes.com.au.