Chinese Bank Run Turns Violent After Angry Crowd Storms Bank of China Branch Over Frozen Deposits – Are You Prepared for the Financial Crash? 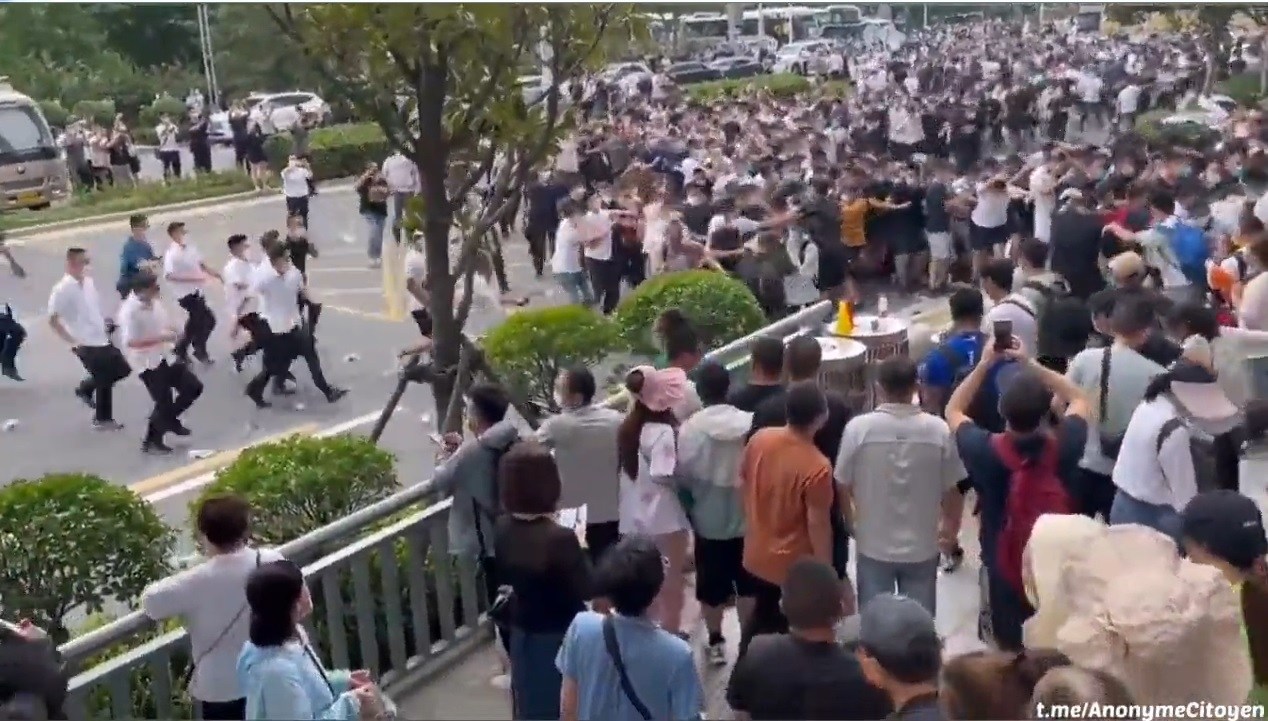 Signs of financial systems collapsing continue all across the world, which should be headline news, but the corporate media in the U.S. gives very scant mention of most of these events, if they cover them at all.

Some of the corporate outlets are starting to report about the total collapse of society in Sri Lanka, but if you go to news aggregate sites like Google News, these reports will be further down the page than what they deem to be the most important news of the day, which in most cases are political news stories, like the continuing Jan. 6 saga sideshow.

Below is a report of violent protests in China that happened today over frozen bank accounts where people can no longer withdraw their money from their own bank accounts.

I found a better video than the short embedded Twitter clips, and put it on our Bitchute Channel.

While rioting and protests for the most part have not yet started in the U.S., just wait. The corporate media cannot continue to suppress the financial apocalypse for too long, and make no mistake about it, it is coming.

A story that barely got any mention last week, and one that I found on RT.com, of all places, even though it was from an American news source (Bloomberg), talks about the collapse of the U.S. industrial industry due to rising energy costs.

Operational challenges arising from soaring energy bills have put the entire US industrial complex at risk of partial shutdown, Bloomberg reported on Thursday.

The country’s second-biggest aluminum mill, which accounts for 20% of the national supply, reportedly laid off 600 workers in late June after its electricity bill tripled. Century Aluminum announced plans to leave its Hawesville mill idle for as long as a year, taking out the biggest of its three sites in the US. Meanwhile, the country’s largest aluminum producer Alcoa said it was cutting its production by a third at a mill in Indiana.

At least two steel mills have started to halt some operations in a bid to minimize energy costs, an unnamed industry executive told the agency. In May, a group of factories across the US Midwest warned the country’s energy regulators that some enterprises were on the brink of shutdown for the summer months or longer due to “unjust and unreasonable” electricity costs.

In June, natural gas prices tripled compared to the same period a year ago, sending bills for households and businesses soaring to previously unseen levels. Meanwhile, electricity rates for industrial customers are projected to hit an all-time high this summer.

Soaring costs have forced some businesses to put millions of dollars of credit on the line to secure power and gas contracts, according to Michael Harris, whose firm Unified Energy Services purchases fuel for industrial clients.

“That can be devastating for a corporation,’’ Harris told the agency. “I don’t see any scenario, absent explosions at US LNG facilities’’ that trap supplies at home, in which gas prices are headed lower in the long term. (Full article.)

In Indiana, Kaiser Aluminum closed down last week, not necessarily because of energy costs, but due to the inability to secure magnesium to produce aluminum beverage and food packaging products.

Kaiser (KALU) anticipates production and deliveries will be reduced by 30%-40% in July and ~50% during the rest of Q3.

As previously disclosed, US Magnesium, Kaiser Warrick’s largest supplier of magnesium, declared force majeure last September; while US Magnesium had continued to supply roughly half its contractual commitment, deliveries recently stopped, and Kaiser Warrick has been unable to immediately source additional magnesium from alternative sources.

Kaiser (KALU) also warned that continuing performance difficulties at Alcoa’s Warrick Operations facility and the resulting impact on delivery of molten aluminum “continue to impact the financial and operational performance” of Kaiser Warrick and the company. (Full article.)

People who just blindly depend on “the system” and think it will always be there, or that the government will come in and rescue people, are going to be in for some huge surprises at some point.

Everybody should be thinking about energy sources right now, and if you can afford it, start investing in alternative forms of producing energy, before a run on those types of products begins, as has already happened in Europe, mainly in Germany.

Natural gas is going to be the most problematic source of energy for the rest of this year, as supplies continue to dwindle, especially after a major explosion happened at a natural gas plant in Oklahoma today, and if you are on natural gas and have options to switch to something else, even propane, do it while you can.

Those who live in colder climates and have abundant wood available, should look into either wood burning stoves, or even wood burning boiler systems that can heat your entire home with wood using the more healthy “radiant heat” from hot water running through radiator pipes.

Those in sunny climates should be looking at solar alternatives. But not just solar panels that feed back into the grid and help save on your electric bill, because they will become worthless if the grid goes down, but also a battery storage system to utilize your solar energy when the system collapses.

All of these options are for the most part available now, but they may not be in the near future.

While the world of high, and not so high finance, is obsessing over the volatility of cryptos and recent painful losses for overlevered players who – much to the amazement of plain vanilla equity investors – were not bailed out by a magnanimous Fed (which however only rescues stock markets, not cryptos), things in China with its $54 trillion financial system, or more than double the size of assets across US commercial banks, are once again getting heated.

As Reuters reports, a large crowd of angry Chinese bank depositors faced off with police Sunday in the city of Zhengzhou, and many were injured as they were taken away, amid the freezing of their deposits by some rural-based banks.

The banks froze millions of dollars worth of deposits in April, telling customers they were upgrading their internal systems. The banks have not issued any communication on the matter since, depositors said.

According to Chinese media the frozen deposits across the various local banks could be worth up to $1.5 billion and authorities are investigating the three banks.

The protesters are among thousands of customers who opened accounts at six rural banks in Henan and neighboring Anhui province that offered higher interest rates. They later found they could not withdraw their funds after media reports that the head of the banks’ parent company was on the run and wanted for financial crimes.

Videos and photographs on social media showed depositors waving banners and throwing plastic bottles at approaching security guards who then roughly dragged some of the protesters away.

Citizens storm the Bank of China in Zhengzhou over bank account freezes. Banks froze millions of dollars in deposits last April, simply explaining to savers that they need to upgrade their internal systems. Since then, customers have not received any kind of communication. pic.twitter.com/XS9zuXRuEK

Besides uniformed police, there were the teams of men in plain T-shirts. A banking regulator and a local government official arrived, but their attempts to talk to the crowd were shouted down.

“We came today and wanted to get our savings back, because I have elderly people and children at home, and the inability to withdraw savings has seriously affected my life,” said a woman from Shandong province, who only gave her last name, Zhang, out of fear of retribution. Zhang and another protester, a man from Beijing surnamed Yang, told the AP the protesters had heard from the officials before and don’t believe what they say.

The police then announced to the protesters from a vehicle with a megaphone that they were an illegal assembly and would be detained and fined if they didn’t leave. Around 10 a.m., the men in T-shirts rushed the crowd and dispersed them. Zhang said she saw women dragged down the stairs of the bank entrance. Zhang herself was hit, and said she asked the officer, “Why did you hit me?” According to her, he responded: “What’s wrong with beating you?”

Yang said he was hit by two security officers including one who had fallen off the stairs and mistakenly thought in the chaos that Yang had hit or pushed him.

“Although repeated protests and demonstrations don’t necessarily have a big impact, I think it is still helpful if more people get to know about us, and understand or sympathize with us,” Yang said. “Each time you do it, you might make a difference. Although you will get hit, they can’t really do anything to you, right?”

“I feel so aggrieved I can’t even explain it to you,” Zhang, 40, told Reuters. Zhang said he had been hoping to retrieve about 170,000 yuan ($25,000) deposited with one of the banks, the Zhecheng Huanghuai Community Bank.

Zhang said he had suffered injuries to his foot and thumb, and was taken away by four unidentified security personnel at around midday. Security personnel outnumbered protesters by around three to one, he said.

This is huge. Don’t know how this will end. Henan bank is NOT the only one that is having problems with liquidity. All four Chinese banks are having the same issue. Some depositors found they can save and can NOT withdraw money with their bank cards. #bankrun #China #CCP pic.twitter.com/5WYYgpmIWP

The banks, which include the Yuzhou Xinminsheng Village Bank and the Shangcai Huimin Country Bank, are under investigation by the authorities for illegal fundraising, the state-run Global Times reported.

The protesters were eventually bused to various sites where Zhang said they were forced to sign a letter guaranteeing they would not gather anymore. Late Sunday, Henan banking regulators posted a short notice on their website saying that authorities are speeding up the verification of customer funds in four of the banks and the formulation of a plan to resolve the situation to protect the rights and interests of the public.

More than 1,000 depositors from across the country had planned to gather in Zhengzhou last month to try to withdraw their money but they were unable to when their COVID-19 health codes, which determine if one can travel, switched to a “no travel” status.