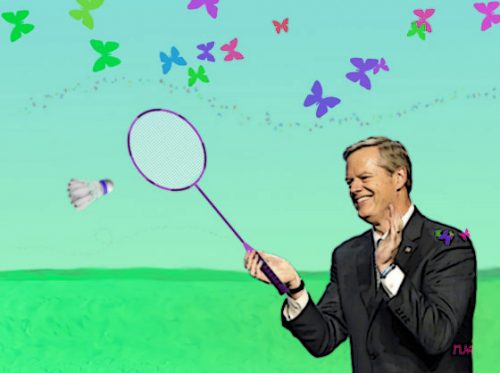 Howie Carr: He was going to lose – in the Republican primary.

Forget the usual BS about wanting to spend more time with his family. The real reason Charlie Baker is out of the 2022 fight is the fact that he wasn’t going to defeat Geoff Diehl, the ex-state rep from Whitman who was running against him for the nomination.

Nor was his lieutenant governor, Karyn “Pay to Play” Polito.

Polito and Charlie Parker – as Dementia Joe Biden calls him – are in fact retiring due to ill health.

The voters got sick of them.

In May, Dementia Joe told Parker, “You’re doing a hell of a job.”

Endorsed by Joe Biden! What more did you need to know about his future prospects in GOP circles?

The departure of Tall Deval – his other nickname — from the scene is a big win for Donald J. Trump. He came out early for Diehl, and now he claims another scalp of an anti-Trump poseur. Prime irony: the Washington Post has a story this morning about the 10 GOP politicians POTUS has been feuding with and how their fates will indicate how popular Trump remains with the base.

Before the ink was even dry on the story, Parker was out. more