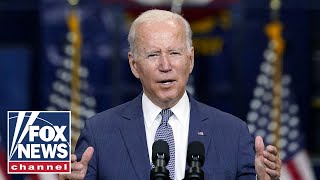 Joe Biden once again showed the world his cognitive decline in action, this time by referring to First Lady Jill Biden as the former “vice president.”

During remarks at the USS Delaware commissioning commemoration ceremony on Saturday, Biden referred to his wife as the former vice president, which was in fact his position in the Obama administration.

“I’m deeply proud of the work [Jill is] doing as first lady with Joining Forces initiative she started with Michelle Obama when she was vice president,” Biden told the audience.

JOE BIDEN: “I’m deeply proud of the work [Jill is] doing as first lady with Joining Forces initiative she started with Michelle Obama when she was vice president” pic.twitter.com/wO12WPQ56I

Biden was referring to a 2011 Joining Forces initiative launched by former First Lady Michelle Obama and then-Second Lady Jill Biden calling for the private and public sector to “rally around” veterans and service members.

This comes amid growing calls by Republicans to invoke the 25th amendment following a disastrous trip to Europe where Biden made several potentially war-sparking gaffes, warning he’d consider launching chemical attacks against Russia, calling for Vladimir Putin to be overthrown, and telling U.S. troops they’d be deployed to Ukraine.

Biden’s foreign trip has been a complete disaster.

Biden called for regime change in Russia, said U.S. troops were being sent to Ukraine, and suggested he would use chemical weapons against Putin.

His staff had to correct him each time. pic.twitter.com/FUfgcA5EGn

The Hunter Biden Floodgates Have Opened