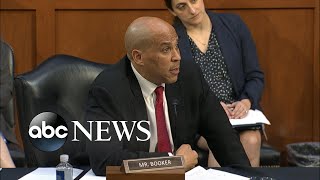 President Biden has made much of nominating the first black woman to the U.S. Supreme Court, fulfilling a campaign promise that his first pick would not be a white, Hispanic or Asian woman or man.

And Senate Democrats – notably the New Jersey lawmaker known for his “I am Spartacus” moment in opposition to Brett Kavanaugh’s nomination – have charged that the inquiry by Republicans regarding Ketanji Brown Jackson’s judicial record amounts to racism and sexism.

But a black woman could have been on the Supreme Court 17 years ago if not for Joe Biden and other Democratic leaders on the Senate Judiciary Committee, argued Sen. Ted Cruz, R-Texas, during debate Monday.

Countering the charges of racism and sexism, Cruz recalled the Democrats’ opposition to Judge Janice Rogers Brown, a black woman, as well as Amy Coney Barrett.

“There is some irony in that – because all of the Democrats on this committee were only so happy to vote against the nomination of Judge Amy Coney Barrett without facing any concerns about the sexism they were showing,” Cruz said.

“And there’s greater irony in celebrating this historic first” of a black female Supreme Court justice, he said, “because it would have occurred 20 years ago.”

Brown was never nominated to the Supreme Court, but she was on a path to the high bench when President George W. Bush nominated her to the most influential appeals court, the D.C. Court of Appeals.

In November 2003, Democrats filibustered Brown’s nomination to the D.C. Circuit. She finally was confirmed by the Senate in June 2005, with Biden voting against her nomination.

A month later – when Brown’s name was floated for a Supreme Court vacancy – Biden said he would not support her nomination.

“I can assure you that would be a very, very, very difficult fight and she probably would be filibustered,” Biden told “Face the Nation.”

An African American woman could have served on the Supreme Court 20 years ago—except for the fact that Democrats including Joe Biden—filibustered Judge Janice Rogers Brown. pic.twitter.com/oc8WxAbvcU

During the Senate hearings for Jackson last month, Cruz and Sens. Josh Hawley of Missouri and Lindsey Graham of South Carolina questioned the judge about her lenient sentences in child pornography cases, her representation of accused Islamic terrorists and her stance on the teaching of the “anti-racist” principles of the neo-Marxist Critical Race Theory in schools.

But at the conclusion of the questioning, Democratic Sen. Cory Booker of New Jersey told Jackson she had faced “insults here that were shocking to me.”

“Nobody’s taking this away from me,” Booker said as Jackson wept. “Don’t worry, my sister. Don’t worry. God has got you. And how do I know that? Because you’re here, and I know what it’s taken for you to sit in that seat.”

Cruz, however, pointed out in an interview that unlike Democrats’ grilling of Kavanaugh and Barrett, Republicans focused their questions on policy issues.

“You played clips of the Democrats slamming Republican nominees, going personal, going into the gutter, going after their character,” Cruz told Fox News. “If you look at the hearing the last two days, the questions that Republicans focused on were her record and in particular, her judicial record.”

“In every single case where she had discretion a child pornography case, she gave dramatically lower sentences than the sentencing guidelines provide for, and that the prosecutor asked for,” Cruz said.