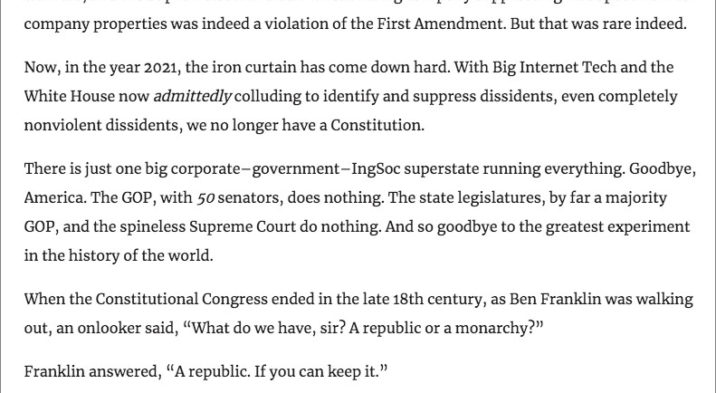 HONEST brokers, regardless of party affiliation, will have to admit: the American Republic has long been dead and buried. On the other hand, millions upon millions of patriots still cling to its founding principles — and therein lies its possible (emphasis placed) re-constitution.

IN reality, ever since Woodrow Wilson, an elitist and a progressive socialist ascended to the helm, the essence of America has been snuffed out; creep by creep.

INDEED, under Wilson’s stewardship, his administration created the Federal Reserve System, the Federal Income Tax and the FTC, among other governmental monstrosities. Naturally, each money-sucking behemoth was presented as “necessary” for the “good and welfare” of the (unwashed) masses. Of course, the same song and dance has been playing out for decades on end, that is, until “The Donald” burst onto the scene. Is it any wonder that he is so hated and so feared by the deep-state and its myriad of tentacles??

TRUTH dare be told, like him or not, this is a man who believes in American exceptionalism. Plain and simple. Thus, sans any apologetics, he operates from said perspective and prism. Yes, “MAKE AMERICA GREAT AGAIN” aka MAGA says it all.

INCONTESTABLY, America was founded as a Constitutional Republic based upon Judeo-Christian principles and not as a democracy. In fact, countless (those who know better and those who don’t) confuse and conflate democracy with freedom-based values. Herein lies the rub.

FOR all practical purposes, democracy, without its Constitutional basis, is nothing more than mob rule. Effectively, whomever rules the majority (the 51%) is in a position to squash 49% of the rest. Freedom, what’s that?? By extrapolation, the aforementioned warning is evidenced through Thomas Jefferson’s wise words:

“The democracy will cease to exist when you take away from those who are willing to work and give to those who would not.”

ALL of which brings the discussion straight back to two prescient thinkers and scholars; one of whom is widely known and respected in the field of political science (in America and Israel), and the other is recognized as a so-called “Jack of all trades.”

FULL DISCLOSURE: as per the former, it is not for nothing that Professor Paul Eidelberg endorsed this author’s book, BANNED: How Facebook Enables Militant Islamic Jihad.

NOT only that, his prescience can be found throughout Adina Kutnicki: A Zionist & Conservative Blog. For example …

NOW, onto the latter’s tragic eulogy, that is, unless the so-called “white hats” manage to turn the nation around, God willing.

July 2021. A month that will live in infamy. If there is such a thing as “history” in the Biden–Orwell–Soros omni-dictatorship, July 2021 will mark the month that the Constitution, the “greatest work ever thrown off by the hand and mind of man,” as Gladstone put it, was thrown into the Ministry of Truth Memory Hole.

It was put into the “History Erase” well. A bottomless pit.

In this month, actually starting with the month before, that the superpowers of the tech world, Google, YouTube, Amazon, Twitter, Facebook, and Yahoo, admitted to working with the Biden/NKVD administration to suppress free speech.

For months now, we had known that the tech powers were watching us and suppressing any dissident speech against the current administration. I have seen it up close and personal. But what was argued was that the First Amendment to the Constitution protected us only against Congress and the executive branch suppressing free speech. It did not protect us from private enterprises, even very large private enterprises like Amazon or Google or Facebook, keeping tabs on citizens and shutting them out of the internet-sphere if they expressed views contradicting the views and policies of the Biden–Harris–Big Tech Party.

Now, in the year 2021, the iron curtain has come down hard. With Big Internet Tech and the White House now admittedly colluding to identify and suppress dissidents, even completely nonviolent dissidents, we no longer have a Constitution.

There is just one big corporate–government–IngSoc superstate running everything. Goodbye, America. The GOP, with 50 senators, does nothing. The state legislatures, by far a majority GOP, and the spineless Supreme Court do nothing. And so goodbye to the greatest experiment in the history of the world.

When the Constitutional Congress ended in the late 18th century, as Ben Franklin was walking out, an onlooker said, “What do we have, sir? A republic or a monarchy?”

Franklin answered, “A republic. If you can keep it.”