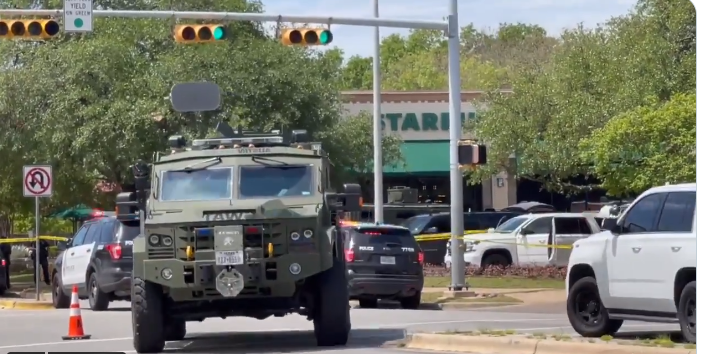 A shooting occurred near downtown Austin at around 11:42 a.m. on Sunday near the Arboretum Mall at Great Hills Trail and Rain Creek Parkway. There is an apartment complex behind the mall. The suspect who allegedly shot and killed a Black man and two Hispanic women has been identified as Stephen Nicholas Broderick, 41. He was previously charged with sexual assault of a child while a detective with Travis County Sheriff’s Office. Police are describing the Austin shooting incident as a domestic. Austin, TX is in Travis County, so they are familiar with the subject. Police advised residents to shelter in place and stay away from the area as a manhunt ensued.

UPDATE: Stephen Broderick has been arrested according to FOX7 Austin. He was found walking along US 290.

In a media update Sunday afternoon, Interim Austin Police Chief Joe Chacon said officers responded at 11:42 a.m. to a 911 call coming from an address near Great Hills Trail and Rain Creek Parkway. A reverse 911 call was sent to residents in the area to notify them of the shooting and urging them to shelter in place.

Three people were pronounced dead at the scene. The victims are two women and a man, Chacon said. A child was involved in the incident but he was located safe and is now in police custody, C said…

…Records show Broderick, a former Travis County sheriff’s office detective, is charged with sexual assault of a child. Broderick was booked into jail in June and spent 16 days behind bars prior to posting bail, which was set at $50,000.

Court and public records show that Broderick’s wife filed for a protective order and divorce shortly after her husband’s arrest.

Though police stated that there was no risk to the public, they did mention that a hostage situation could result.

No Danger to the public?

UPDATE: A person has been arrested in the Kenosha County bar shooting. (Milwaukee Journal Sentinel)

The incident came less than one day after a man who was ejected from Somers House bar that caters to college students in Kenosha County, Wisconsin returned and opened fire inside the building. Three were killed and two injured. The suspect in that shooting was still at large as well.

“We believe our suspect knew who he was targeting,” Kenosha County Sheriff David Beth told a news conference Sunday morning, adding that the suspected shooter was still at large, although the public is not thought to be in danger.

The shooting happened after the suspect was asked to leave the bar and then returned and opened fire, she said. It was unclear whether the victims knew the suspect.

Hint: any suspect in a shooting incident that is still at large, even if they knew the victims, can be a “danger” to the public. Though police are trying to calm fears in these two incidents, it’s not a good idea to pretend there’s no problem. People shouldn’t panic (we know they do it anyway), but be aware of their surroundings. The last three weeks have seen numerous shootings from Omaha, Nebraska at Westroads Mall to Columbus, Ohio where several people were shot at a vigil, and the FedEx shooting in Indiana.

As one Twitter user stated, “This s*** has to stop! How can I not lose my 2nd amendment rights if it doesn’t?” And THAT is the question – the fight for the 2A may have just become the biggest ever.