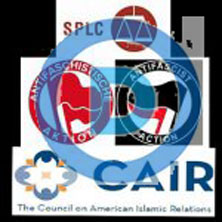 On Sunday, a group of homelessness activists who dressed up in Antifa-style black bloc, armed with batons and knives, entered the lobby of the Red Lion Hotel in Olympia, Wash., demanding the hotel open rooms for homeless people. Antifa agitators allegedly assaulted an employee while other employees hid in a basement room for more than six hours. The police eventually secured the hotel, but in the skirmish, agitators chanted, “Pigs in a blanket, fry ’em like bacon,” a death threat against cops. more