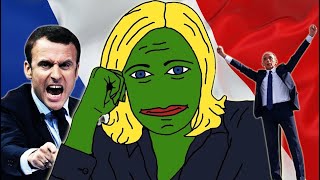 Antifa members in France reacted to the outcome of the first round of the presidential election by rioting in several cities because they didn’t like the result.

Populist Marine Le Pen will face off against incumbent Emmanuel Macron in the second and final round of the election in two weeks after the pair racked up the most votes out of all the candidates.

This apparently displeased members of the far-left Antifa extremist group, who responded to the democratic vote by rioting in several major cities.

Rennes, Brittany saw innumerable acts of arson and several violent clashes last night in the aftermath of the vote.

Demonstration against Emmanuel Macron and Marine Le Pen this evening at #Rennes following the announcement of the results of the first round. Demonstrators erect barricades in the city center.
#presidentielles2022 #1erTour pic.twitter.com/LvYDf2sWTe

Protesters who marched through the streets also caused property damage.

#Rennes #France
A group of approximately 500 gathered to demonstrate the presidential election results; with some individuals setting fires and causing property damage.
pic.twitter.com/3oiSWuV8dC

Other Antifa rioters attempted to smash their way into a bank.

Antifa rioting in parts of France, this is Rennes tonight as a bank is targeted, they’re angry because Le Pen and Macron are the ones going through to the second election round, and they don’t like either 🤷🏻‍♂ pic.twitter.com/Ag0YvSI7rb

Protests against Macron and Marine Le Pen tonight in Rennes following the announcement of the results of the first round of the French presidential election. #electionpresidentielle2022 #France #Election2022 #France #KurdsatNews pic.twitter.com/RACHEQsQQT

Rioters also set off fireworks to protest the result in the city of Lyon.

Marseille was also hit with unrest.

#France by adding elections, there are protests demanding to leave the #EuropeanUnion #paris #Marseille pic.twitter.com/r0QB9Bjs3U

Despite Le Pen’s success, all the other establishment parties, from Republicans to Communists, have urged their supporters to vote for Macron in the second round, closing ranks around the former Rothschild banker and Socialist technocrat.