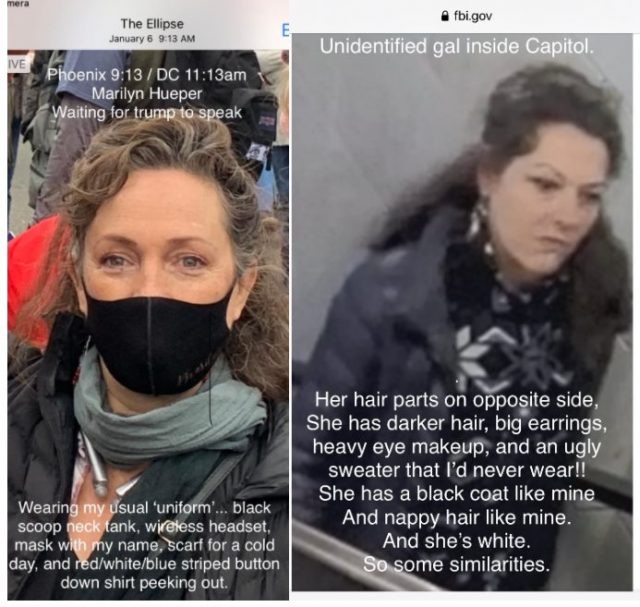 Last week the FBI raided the home of an Alaska couple who had attended former President Donald Trump’s Jan. 6 peaceful rally near the White House.

According to the Alaska Watchman:

Paul and Marilyn Hueper, owners of Homer Inn & Spa, woke with a start at 9 a.m. April 28 when a dozen armed FBI agents kicked down their front door in an investigation associated with Rep. Nancy Pelosi’s stolen laptop, which was taken during the Jan. 6 siege of the nation’s Capitol.

Homer resident Marilyn Heuper (left), posted this photo on Facebook to show the physical differences between her and the woman who FBI agents were looking for when they raided her home on April 28.

Speaking April 29 to Kenai-based radio host Bob Bird of the Bird’s Eye View, Paul recalled that he was alarmed and shocked to come out of his bedroom with seven guns pointing at him and his wife.

“It was a little alarming when I turned around the corner,” Paul said. “The first thing they did was start barking out commandments.”

Ultimately, the couple was handcuffed and interrogated for the better part of three hours before being released. In the end, it was a case of mistaken identity.

Alaska radio host and former U.S. Senate candidate Bob Bird weighed in on the near tragedy with these comments in the Alaska Watchman, “[This] is an example of what happens when a lawless and completely illegitimate political party and administration come to power. The Democrats are utilizing the proven techniques of communism and fascism, and weaponizing federal law enforcement for political purposes. They are now reaping the fruits of the November’s compromised election. Its aftermath spells the end of freedom in America. It is no longer a threat. It is here, and none of us are safe.”

The increasingly partisan FBI never ceases to amaze in their clownish but dangerous pursuit of anyone who attended President Trump’s rally on Jan. 6.  The latest barely-averted disaster was the 9 am home invasion in Homer, Alaska by seven armed-to-the-teeth invaders.

Reminiscent of the wrong house no-knock warrant which resulted in the death of Brianna Taylor, tragedy was only averted by the victims of the FBI intrusion not grabbing guns to defend their home.

The ultimate irony is that they were in search of Nancy Pelosi’s laptop which they mistakenly believed made it to the Kenai Peninsula in Alaska. The day prior, FBI agents raided the home of President Trump’s lawyer Rudy Giuliani, on a highly publicized raid designed to show that the Trump administration had failed in efforts to end the corruption of the once proud agency. During the raid, Giuliani offered them a copy of Hunter Biden’s laptop which agents declined due to their belief that only supporters of President Trump should be subjected to their jack boot tactics.”

If this story does not chill you to the bone about the absence of basic civil rights in America, very little will.

Rick Manning is President of Americans for Limited Government.