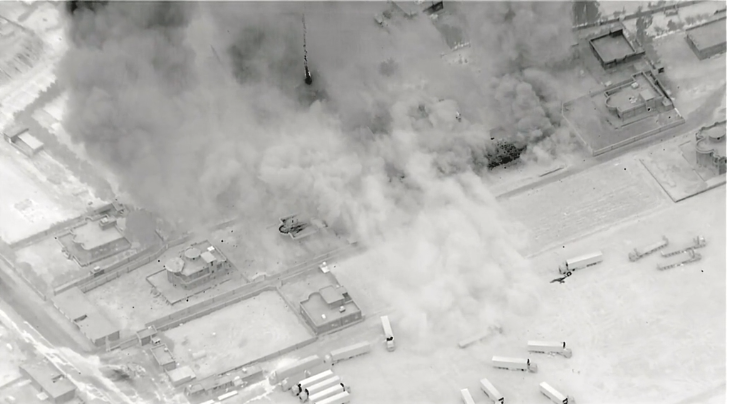 Biden ordered airstrikes on three positions of Iranian militias that have been sending drone attacks near US forces in Iraq. The purpose was a “defensive” action and was meant as a deterrence to future rocket/drone attacks. The US Airstrikes were conducted on Sunday evening with F-15 Strike Eagle and F-16 Falcon aircraft. In response, the militias conducted more attacks on Monday.

The initial airstrikes were aimed at two facilities in Syria and one in Iraq that the Pentagon said were used as weapons storage facilities.

At President Biden’s direction, U.S. military forces earlier this evening conducted defensive precision airstrikes against facilities used by Iran-backed militia groups in the Iraq-Syria border region. The targets were selected because these facilities are utilized by Iran-backed militias that are engaged in unmanned aerial vehicle (UAV) attacks against U.S. personnel and facilities in Iraq. Specifically, the U.S. strikes targeted operational and weapons storage facilities at two locations in Syria and one location in Iraq, both of which lie close to the border between those countries. Several Iran-backed militia groups, including Kata’ib Hezbollah (KH) and Kata’ib Sayyid al-Shuhada (KSS), used these facilities.

As demonstrated by this evening’s strikes, President Biden has been clear that he will act to protect U.S. personnel. Given the ongoing series of attacks by Iran-backed groups targeting U.S. interests in Iraq, the President directed further military action to disrupt and deter such attacks. We are in Iraq at the invitation of the Government of Iraq for the sole purpose of assisting the Iraqi Security Forces in their efforts to defeat ISIS. The United States took necessary, appropriate, and deliberate action designed to limit the risk of escalation – but also to send a clear and unambiguous deterrent message.

As a matter of international law, the United States acted pursuant to its right of self-defense. The strikes were both necessary to address the threat and appropriately limited in scope. As a matter of domestic law, the President took this action pursuant to his Article II authority to protect U.S. personnel in Iraq.”

Iran issued its usual condemnation by accusing the US of “destabilizing” the region. Iraq issued a rare condemnation saying that the US violated their sovereignty by launching the attacks. Between 4 and 7 militia members were killed.

In the late afternoon, around dusk, reports emerged that pro-Iranian groups had shelled areas in eastern Syria across from Deir Ezzor, ostensibly targeting US forces near the Omar oil fields. This is an important and strategic area and US forces who support the Syrian Democratic Forces, have been reported to have a facility or base in this area. The attack was linked to airstrikes the US had carried out in Syria targeting pro-Iranian groups on Monday.

“US Forces in Syria, while under multiple rocket attack, acted in self- defense and conducted counter-battery artillery fire at rocket launching positions,” wrote Col. Wayne Marotto, the spokesperson for the US-led Coalition to defeat ISIS.

The US was assessing the damage from the rocket attacks. No injuries were reported.