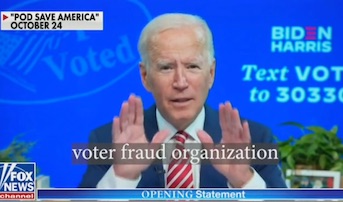 It’s frustrating to hear people on the Right, including some who should know better, claim there’s “no evidence” of significant, possibly outcome-changing fraud in the last presidential election — even as the forensic audit in Arizona uncovers multiple discrepancies.

No, there may not be absolute, incontrovertible proof of election fraud — yet.  But there is plenty of evidence, good reasons a rational person might question the outcome.  Here are ten that come to mind, in no particular order:

Eyewitness testimony.  Since November 3, hundreds of people have come forward to report that they personally witnessed various irregularities in the vote-counting process: ballots run through tabulating machines multiple times; “pristine” mail-in ballots; ballots that appeared to have been printed on different paper or filled out by machines — the list goes on.

Two questions come to mind.  First, what would these witnesses stand to gain by making knowingly false claims?  Many submitted actual affidavits, subjecting themselves to potential legal liability.  Second, could that many people simply be mistaken?  It seems unlikely.

Our own eyes.  Actually, the eyewitness testimony confirms what many of us have since seen for ourselves, via security camera footage: cases of ballots being pulled out from under tables in Fulton County, Georgia, right after observers were told to go home for the night.  Vans pulling up to TCF Center in Detroit, with dozens of boxes unloaded in the dead of night.

We also saw, live on television, huge, sudden jumps in vote totals for Biden, in some cases accompanied by corresponding drops in Trump’s totals.

Are there innocent, plausible explanations?  Perhaps.  But I have yet to hear any.  Mostly, we’re just told, “Move along, folks.  Nothing to see here.”   more here